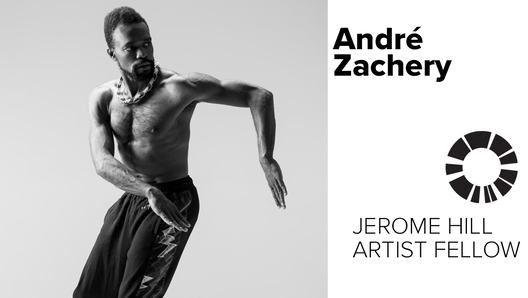 André M. Zachery (b. 1981) is a Brooklyn-based interdisciplinary artist of Haitian and African American descent, and is a scholar, researcher and technologist with a BFA from Ailey/Fordham University and MFA in Performance & Interactive Media Arts from CUNY/Brooklyn College. As the artistic director of Renegade Performance Group his practice, research and community engagement artistically focuses on merging of choreography, technology and Black cultural practices through multimedia work. André is a 2016 New York Foundation for the Arts Gregory Millard Fellow in Choreography and 2019 Jerome Hill Foundation Fellow in Choreography.

RPG has earned mentions and favorable reviews from publications such as The New York Times, The New Yorker, The Village Voice, Culturebot, Infinite Blogspot, Futuristically Ancient, Hyperallergic, the Brooklyn Rail, the Daily News and AFROPUNK. As a technologist André has collaborated with various artists through RPG, the design team of 3LD Art & Technology Center and The Clever Agency on design installations, immersive media productions, film productions, film editing, projection mapping and performance collaborations.

​As a scholar he has been a member of panels, led group talks, facilitated discussions and presented research on a myriad of topics including Afrofuturism, African Diaspora practices and philosophies, Black cultural aesthetics, technology in art and performance and on expanding the boundaries of art making within community. He has been a panelist and presented his research at institutions such as Duke University, Brooklyn College, University of Virginia and Massachusetts Institute of Technology. André has taught at Brooklyn College and been a guest faculty member at the dance programs of Florida State University, Virginia Commonwealth University, The Ohio State University and University of California Los Angeles.

Through research fusing digital programming and media design, contemporary African Diaspora dance techniques and critical race theory through the lens of Afrofuturism, I contend that there is an urgent need to reconsider digital and virtual landscapes not as inherently neutral or a-cultural spaces but as entities that are devised, coded and algorithmically structured from socio-historical corporeal experiences. My objective through my work is to acknowledge “haptics” as something that can be varied, measured and qualitatively quantified from cultural practices that can alter and simultaneously be altered across mediated terrains. I contend that the haptics of Africanist cultures ranging from the continent into its Diaspora are missing from digital inventories and thus databases are not only incomplete, but not accounting for new considerations or feedback from shared experiences.

As a choreographer, digital programmer and cultural researcher I fuse history, technology and personal narrative into projects centering African Diaspora cultural practices such as improvisation, imagery, dissociation, double-consciousness and repurposing. I consider these practices to be “futuring actions”.
​
I actualize these futuring actions through conceptually devising interdisciplinary multimedia projects which address the tensions, intersections and feedback between the body, space, architecture and time. Though technology is an integral component, using dance as the primary mode of investigation centralizes the body in this ideological chasm. In this way dance becomes more than a mode of artistic expression but an act of place-making to locate layered existences and experiences part of a greater collective. Through this exchange the haptics of bodies - more specifically Black bodies - can begin to influence and expand the possibilities in digital and virtual futures for Africanist populations across the globe.
André M. Zachery - CV
DONATE